Ozanne Construction Company Inc. and DLR Group | Westlake Reed Leskosky have successfully teamed up on several design/build projects. Most notably, the CLE Parking Redevelopment Program – Phase II. This was a project the two firms teamed up on and completed in 2016 in time for the Republican National Convention. The 200,000 square foot structure, related site and utility work was completed from design through construction in a little over a year and provided a new landmark structure to greet people coming into the airport campus. The working relationship of the two firms allowed the design and construction of the building to undergo several changes throughout the process without having significant impacts on budget or schedule.

The project as proposed included 2 independent canopies over existing parking. Early design discussions with the airport explored several studies of the program as listed in the proposal. It was in these early discussions with the client that the original project site at the Orange Lot would not function as intended and the project site was moved to the Blue Lot. A canopy over Park Road was added to allow passengers to walk out of the elements to the concourse from the Blue Parking lot. The design/build team quickly adapted the building design to the new site. While developing this new concept the monumental signage was adapted to the Red Lot Building with careful consideration of its location relative to sight lines from approaching traffic. Additional architectural details using perforated metal allowed the building to change transparency at the night with internal and external lighting strategies. This new design, which integrated into the architecture of the parking canopies the new monumental signage, created an identity for the airport and now acts as a gateway for vehicles entering the airport campus. Project goals exceeded and project budget maintained.

Previously the site had buildings, a gas station, and other uses on it. Utilities feeding the Cleveland Hopkins International Airport ran through and around the proposed site. As the building design was nearing completion, preparation of the site began, and it was at this time that several underground utilities were discovered which interfered with foundation for support of the canopy columns. The challenge came in placing dozens of new canopy support column foundations in exact locations without interrupting underground utility services to the terminal and to allow for efficient parking space layout.

One instance included an old manhole whose cover had been buried years earlier and was not documented. The waterline for the main terminal ran through this manhole. This discovery forced the design/build team to adapt the building design again since moving the waterline was not feasible. The solution adjusted the layout of the Red Lot building. The overall size was reduced. The south façade had to be shifted north away from an existing underground utility structure and into the new canopy. Parking layouts had to be revised due to the loss of area. However, the design team was able to limit the loss of parking spaces to 4.

Another extreme case involved the main fiber optic cable linking the airport to critical safety services. The location of this newer cable was considered sensitive information and as such the exact location was not identified on public records. The canopy column layout was too close to the cable to risk not knowing the exact location of the cable, so this information was provided, and the team worked through solutions to avoid the cable.

The design, construction, and owner team members met after solving these issues. All realized that the potential for encountering additional older undocumented buried utilities was highly likely. So, a strategy for quickly dealing with them in the field would need to be developed. The canopies were supported with drilled pier foundations which limited the footprint and potential for encountering underground obstructions. Pilot holes were drilled at each location prior to drilling piers to prevent utility damage. Three options were developed for avoiding underground utilities. 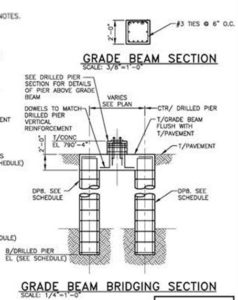 1. Bridging – one drilled pier and grade beam were added. The piers would be located on either side of the obstruction and the grade beam would support the canopy column.
2. Cantilevering – the drilled pier would be enlarged; a grade beam would be added which would cantilever over the buried obstruction.
3. Column relocation – the canopy manufacturer provided guidelines on the distance the columns could move along the building frame above as well as details on how to do this.

Unit pricing was established for each option. Ozanne informed CHIA field inspectors immediately when obstructions were encountered. CHIA management approved the use of the option and field work orders were signed to allow for the work to continue without interruption. All of these unknowns were overcome. No utility interruptions occurred. Critical systems were not disrupted. And the parking count was only reduced by 4 spaces. The monumental signage of the original design concept was maintained. Through all of this the construction team was able to complete all of the “public” side of the work by the original schedule turnover. Minor out of the public view utility and miscellaneous work was completed after the convention was over. All construction projects have their challenges, and this was no different. However, the ability of the design/build team and owner to adjust to changing conditions while maintaining the original design approach allowed the airport to open the Red and Blue Lot Canopies in time for the 2016 Republican National Convention.

Teamwork and quick decision making were essential to complete this project on time. Coordination between CHIA staff, Ozanne, DLR Group | WRL, consultants, and sub trades was the key to achieving this. Daily on-site meetings with construction, design, and owner attending at critical portions of the work made this happen. Cooperation and flexibility of the owner and the design/build team allowed much of these additional costs to be minimized or eliminated through the wise use of owner and design/builders contingency. Action plans were put in place to prevent utility disruptions. Change orders were less than 3% of the original contract amount.