The study of a landmark inevitably leads to the study of the lands and of the course of the lives and the affairs of the people who have occupied the lands. This study involves two elements: history, a fascination; and genealogy, a challenge. The recording of these two elements can be termed the fulfillment. Thus is the fulfillment in this documented account of a landmark, which through the years has been referred to by several names, about which people have wondered and sometimes recounted legends, and which heretofore has gone unaccounted for by historians, by genealogists, and by writers. 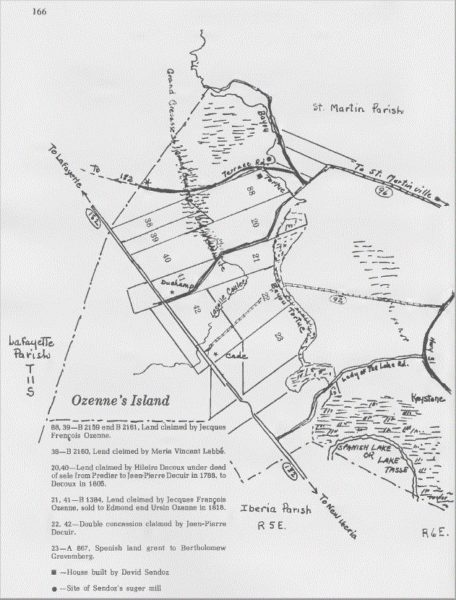 This landmark, variously called the Ozenne House, the Fuselier House, or the Duchamp House stands high on a hill overlooking Bayou Tortue (1) at a point where Highway 96 crosses that bayou on its way from St. Martinville to Highway 182. (2) Actually, this house should be called the Sandoz House, for David Sandoz was its builder. But the other names, so intricately interwoven in the history of the house and the lands around it, are firmly imprinted in five generations of that history. 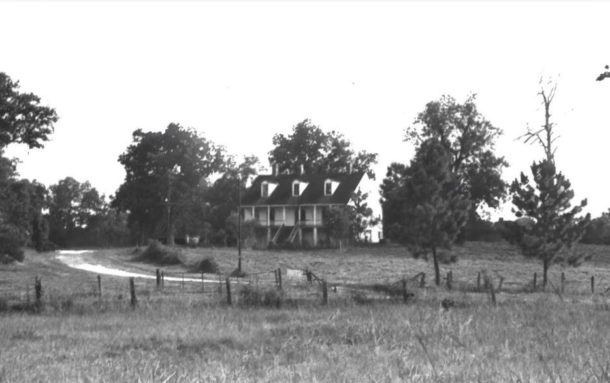 Records of this landmark begin in 1781, with the possession and settlement of the land upon which it stands by Jacques Francois Ozenne. (3) At the time Ozenne, a native of New Orleans and a resident of Pointe Coupee, (4) was a familiar figure in the Attakapas, since in 1773 he contracted to provide timber for building the first Attakapas church, such timber to be cut and brought down to the post from Pointe Couple. (5) Just how active Ozenne was in the settlement of his land claims is unclear, since few of his transactions appear in the St. Martin Parish court records before 1800. (6) Moreover, all his children seem to have grown up and married in Pointe Coupee except Edmond, who remained unmarried, and Ursin, obviously the youngest son, who did not marry until 1828, and even then returned to Pointe Coupee to claim his bride. (7) Ozenne’s daughter, Claire, married Marie Vincent Labbe of Pointe Coupee in 1806. Shortly thereafter, they seem to have settled in the same area as her father. (8) 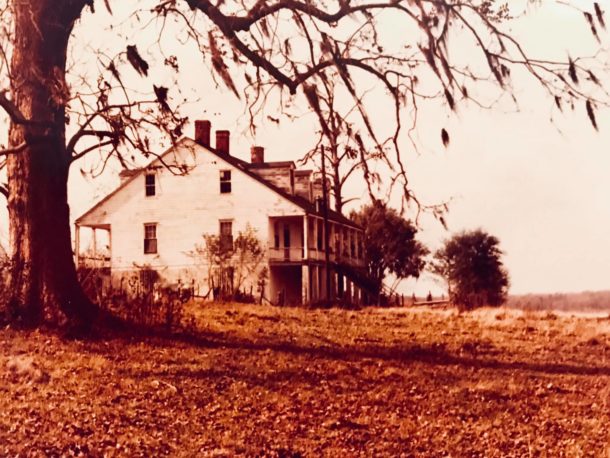 Marguerite Decuir Ozenne died August 28, 1815, at age sixty, leaving all her assets to her husband who was, in turn, to pass them on to their surviving children. (9) About the same time, perhaps because he felt his life ebbing, Ozenne conveyed to his two sons, Edmond and Ursin, the twelve-arpent tract of land fronting Bayou Tortue (sections 21 and 411 “in consideration of a debt he owed to them.” (10) In 1817 Ozenne sold to Antoine Beauvais, another son-in-law, the original fifteen-arpent tract on Bayou Tortue (sec. 881, apparently bringing more of his family into the fold. (11) The next year he cancelled the obligations in the sales of properties to his two sons-in-law. (12) 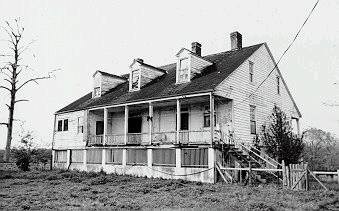 Jacques Francois Ozenne died September 7, 1819. The St. Martin Parish pioneer was seventy -nine years old, of his children only his daughter, Claire, having a longer life span. He left his heirs with property which they, their children, and their grandchildren could occupy and cultivate. (13) In the years that followed, his grandchildren married the grandchildren of Gabriel Fuselier de la Claire, the commandant when Ozenne first came to the Attakapas, and their children married their cousins until they formed a complex network of familial relationships. (14) 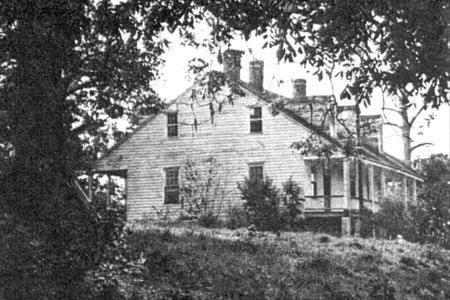 January 7, 1851, Julie Désirée Beauvais Gradenigo, Jacques Francois Ozenne’s grand-daughter and granddaughter-in-law of Gabriel Fuselier, sold to her husband’s brother-in-law, Alphonse Alcide Fuselier, also the grandson of Gabriel Fuselier , the tract of land she had inherited from her father and from her grandfather. (15) Two weeks later Alcide Fuselier sold the west half of the same property to David Francois Sandoz II, stating in the act of sale that the property was vendue nue. (16) 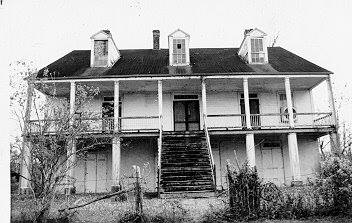 Sandoz built his house some time after January 28, 1851. (17) He and his wife were parents of six children, only one of whom survived them. (18) David Sandoz died in 1878 and his wife, one year later. Marie Amalie, their second child and only heir, then, inherited the property her father and mother had amassed along with the big house on the hill and the sugar mill, all of which they had named Providence Plantation. (19) Marie Amelie had married Eugene Auguste Duchamp September 20, 1860, and they lived on the plantation until 1874, when they built a townhouse in St. Martinville (Maison Duchamp). (20) 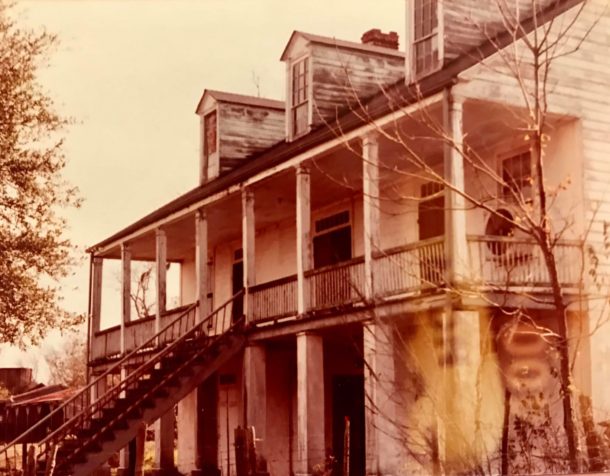 In 1904, six years after her husband’s death, Amalie Sandoz Duchamp sold Providence Plantation to the Billeaud family, (21) leaving some of the children and grandchildren on either side of the place where their great grandparents had settled some one hundred-twenty years before. (22) 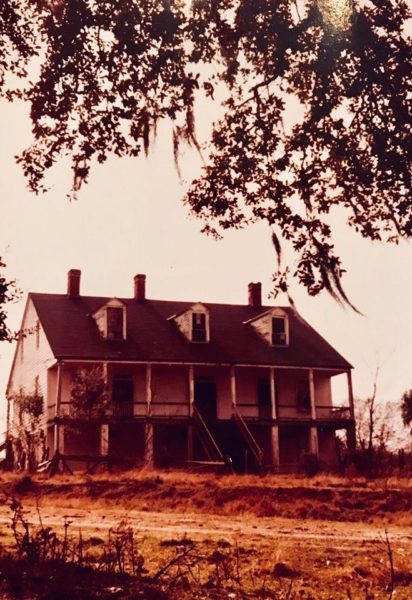 In 1951, when the W.B. Vennard heirs and the Richard D. Chappuis family acquired the old house and its surroundings, they renamed the place “Belle Cherie.” Presently the owners are making plans to repair and renovate the old house from which the years have taken their toll, and to make it livable again. To bring life back to this landmark is all that is needed; the beauty and charm which have always been there will emerge in a fanciful picture of bygone days — the story of a man who envisioned his future and the futures of his children, his grandchildren, and his great grandchildren in the lush and rolling countryside of Côté Gelée. 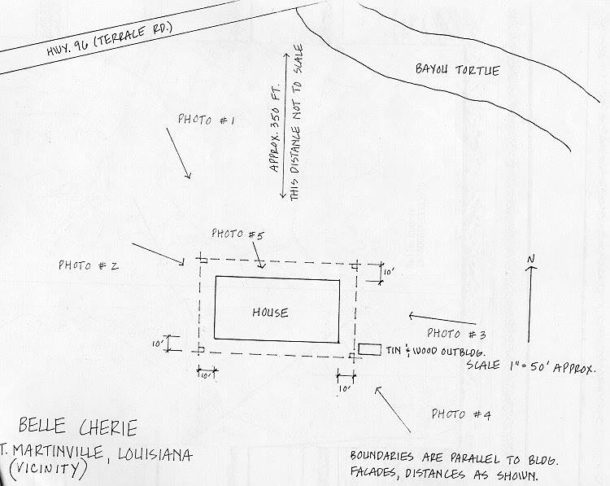 The hill, with Bayou Tortue on one side and lowlands on the other, is said to be 45 feet above sea level. Once called "Ozenne’s Island,” it is one of a series of formations of sandy, red soil, probably deposited centuries ago by floodwaters rushing through what early settlers called the “Grande Crevasse." In later land transactions, it is called Beauvais Coulee. The entire area is known as "Cote Gelee.” (According to land descriptions, the Grande Crevasse is now called Cypress Bayou.)

In early times the Terrace Road did not exist even as a trail. Antoine Ozenne, great, great grandson of Jacques Francois Ozenne, recounts some of his ancestors’ stories of how they had to follow trails over the high lands on their way to St. Martinville in the early 1800s. (Interview with Antoine Ozenne. Aug. 12, 1900). Ozenne lives within earshot of the old Sandoz house and next to the site of the Sandoz sugar mill. There is also evidence that the Terrace Road was part of the stage route to Vermilionville in the mid-1800s. Its improvement as a graveled road connected to Highway 102 and then as a blacktop road can be considered fairly recent.

By Certificate B-2159, dated Feb. 20. 1813, Jacques Francois Ozenne acquired title to a tract 15 arpents wide bounded above by Bayou Tortue and below by the Grande Crevasse (the customary 40 arpents depth), founded on possession from January 29. 1781, as appears in the deed of conveyance from Widow Dauterive, dated March 11, 1786, and on cultivation and settlement from October 1. 1800, to November 20. 1803. A second claim, B-1384, for 11 arpents front on Bayou Tortue below the first claim was based on occupancy since 1700. Louisiana Register of State Land Claims. Indications are that Ozenne claimed possession of the lands but did not occupy them until some time later, probably not bringing his family into the area until after 1800.

In 1728 Jacques Ozenne, a native of St. Ines, Normandy, was employed by the Company of the Indies as a cooper. Glenn R. Conrad, comp.. The First Families of Louisiana, 2 vols. (Baton Rouge, La., 1970), I, 229. He was the son of Jacques Ozenne and Marie Demoulin of St. Ines, Normandy. November 10, 1729, he married Charlotte Julie Moreau in St. Louis Cathedral, New Orleans. Information furnished by Jacqueline O. Vidrine. Jacques Francois was born in 1740. He married Marguerite Decuir in Pointe Coupee in 1766. Bill Barron, ed.. Census of Pointe Coupee in Louisiana, 1745 (Baton Rouge. La., 1970), p. 01.

From the history of the church in St. Martinville. In early 1774, Jacques Francois Ozenne wrote Gabriel Fuselier de la Claire, commandant of the post, complaining that the residents were not paying: "I beg of you to ask the governor to see that it (the debt) is paid, for the residents have refused to pay not only for the wood but also for my trip to the Attakapas.” St. Martin Parish Conveyances, Bk. 1-a, No. 15. On May 1. 1774, Fuselier de la Claire forwarded the request to the governor.

Ibid., p. 240. Marie Vincent Labbe was certified in his claim to 7.5 arpents front by 40 arpents depth (sec. 38) behind his father-in-law’s claim (sec. 88) in 1813. In 1807 Jacques Francois Ozenne conveyed to his son-in-law the adjoining tract (sec. 39), which he had purchased from DeGruisse and wife. Louisiana Register of State Land Claims. DeGruisse's wife was the widow of Bernard Dauterive.

Antoine Beauvais of Fausse Riviere married Marie Manon Ozenne in Pointe Couple in 1797. She is listed as the daughter of Jacques Francois Ozenne of Attakapas. Her groom was the son of Antoine St. Jammes-Beauvais of Illinois and Marie Riche. Veneta DeGraffenried Morrison, comp.. Index. Early Marriages of Pointe Coupee. 1771-1843 (Privately printed, n.d.). As in the case of Manon’s sister who married Jean-Baptist Beauvais of the Parish of Ste. Genevidve in 1793 (Winston Deville, comp., Colonial Marriage Contracts, Vol. Ill: Pointe Coupee. 1763-1803 [Baton Rouge, La.. 1962]), the parents of the bride were not present at the wedding. Suzanne and her husband settled on the west side of Bayou Tortue in the same area as her parents.

In the conveyance to Antoine Beauvais, Ozenne reserves a room for himself in the dwelling house on the property. St. Martin Parish Conveyance No. 3170.

Ibid., No. 12272. David Francois Sandoz, born in Neuchatel, Switzerland, was the son of David Sandoz, Sr. and Marianne Mauley. The couple came to America from Switzerland. The gravestone in St. Martin Catholic Cemetery shows that she was born October 11, 1779, and died March 14, 1864. Her husband died about 1833.

The fact that there was nothing on the property at the time of the sale leads to the conclusion that Sandoz built the house sometime after 1851. He, himself, was a builder, credited with the construction of several buildings on Main Street in St. Martinville. Just when he started work on this house and when he completed it is undetermined; however, Antoine Ozenne recalls that his grandmother, the daughter of David Sandoz had told how builders worked to install windows in the face of an approaching storm. (Interview with Antoine Ozenne).

This storm could have been the great hurricane of 1856, usually called the Last Island Storm, which was strongly felt in the area. The house in which Jacques Francois Ozenne reserved a room for himself (See above, footnote No. 11) must have been located on the half of the property that Alcide Fuselier did not sell to David Sandoz.

Construction details of the house show the use of hand-hewn timbers as well as those cut by circular and pit saws, and briquette' entre poteau along with bousillage. Antoine Ozenne credits slave labor for the variation in building detail, using the information handed down by his grandmother, Amelie Sandoz. (Interview with Antoine Ozenne).

The first mention of Providence Plantation is contained in the act of sale from Amelie Sandoz Duchamp to the Billeaud family in 1904. St. Martin Conveyances. Book 61. folio 416.

The old post office building, now the property of the town of St. Martinville, was once the Duchamp town house. This handsome structure, built about 20 years after the house in the country, offers a sharp contrast in style and detail. It is said that after Duchamp’s death in 1877, Amalie returned to the country to live again in the old plantation house.

The act of donation from Mr. and Mrs. Nickerson to their children describes this tract of land with all buildings and improvements as 7.5 arpents wide and 40 arpents deep, containing 300 superficial arpents, bounded north by David Sandoz or assigns (this includes the Ozennes), south by the estate of Gabriel Fuselier and west by Labbe or assigns. Lafayette Parish Donations Book 138, p. 227.